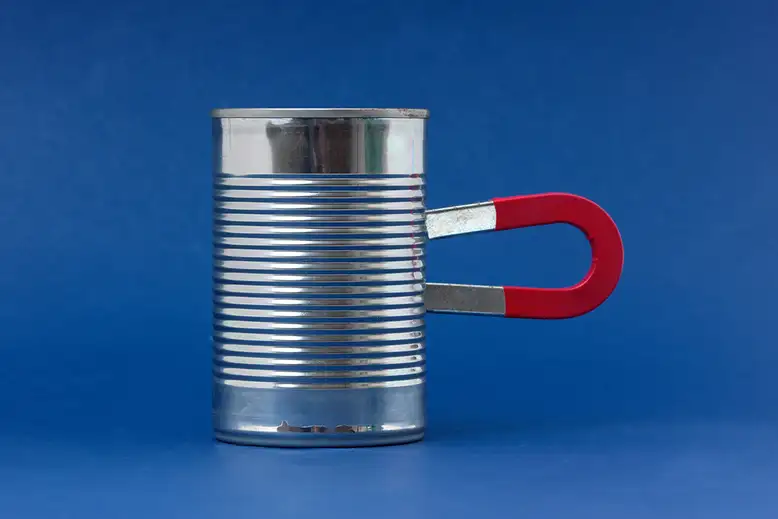 My horseshoe magnet isn’t as strong as it once was. Does magnetism decay over time, like radioactivity?

Ferromagnetism, the kind displayed by metals including iron, cobalt and nickel, has its origin at the atomic level.

A horseshoe magnet is made this way, but the ever-reliable second law of thermodynamics assures us that over time, at any temperature above absolute zero, atoms will move around and randomise their positions. So any magnet will slowly weaken over time.

However, heating or dropping a magnet will hasten this process. That is why your physics teacher glared at you when you carelessly knocked a magnet off the lab desk.

A horseshoe magnet is made by heating a ferromagnetic alloy above a certain temperature, placing it inside a magnetising coil and allowing it to cool. The coil’s strong magnetic field makes microscopic regions inside the metal crystal, called magnetic domains, line up their magnetism with each other. This results in a powerful new magnet.

During everyday use, the magnet will be dropped and banged about. This jostles the magnetic domains and means that they gradually become jumbled up. The more often this happens, the weaker the magnet becomes.

A radioactive element has atoms with an unstable nucleus. This leads it to emit radiation and become more stable. The amount of radiation emitted depends on the number of unstable atoms that are left. Over time, there are fewer unstable atoms and so the sample becomes less radioactive as a result.

Both the weakening of the horseshoe magnet and radioactive decay involve a system inevitably moving from a higher energy state towards a lower one.

The magnetic field in a permanent magnet does tend to decay over time, but not with a predictable half-life as with radioactivity.

“Permanent” or ferromagnetic materials have tiny regions, or domains, of 0.1 to 1 millimetre in length. In these domains, the magnetic fields of adjacent atoms point in the same direction to create miniature magnets. If the majority of the domains in a piece of metal are aligned with one another, the whole material behaves as a magnet.

If the magnet is exposed to an opposing magnetic field, some domains may preferentially align with the external field, reducing the magnet’s overall strength. The domains can also randomly reorientate when energy is imparted to the magnet, such as when it is dropped or struck sharply.

In a similar way, magnetism is gradually lost when the magnet is heated. At a temperature called the Curie point – this varies in different metals, but it is around 770° in iron – permanent magnetism is lost altogether.