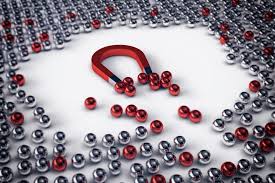 Have you heard of alnico magnets? Here is a breakdown.

According to IQS Directory:

Chapter One – What are Alnico Magnets?
“An Alnico magnet is a permanent magnet made of aluminum, nickel, and cobalt. They come in isotropic, non-directional, or anisotropic, mono-directional, form. Once magnetized, they have 5 to 17 times the magnetic force of magnetite or lodestone, which are naturally occurring magnets that attract iron.

“Alnico magnets have a low temperature coefficient and can be calibrated for high residual induction for use in high temperature applications as high as 930°F or 500°C. They are used where corrosion resistance is necessary and for various types of sensors…

“The first magnets were naturally occurring lodestones that were used by explorers to find the magnetic north pole. During the first industrial revolution, developers created man made magnets, which led to the development of the Alnico magnet in the early part of the 29th Century.

Chapter Two – How Alnico Magnets are Made
“Alnico magnets are produced by sintering or casting a mixture of aluminum, nickel, and cobalt. In some cases, iron, copper or titanium may be included to enhance the magnetic force. The casting process follows the traditional method of pouring a molten mixture into a mold, which is usually made of a resin bonded sand.

“The grade of an alnico magnet depends on the chemical composition of its mixture. The chart below shows a sampling of some of the different grades of alnico magnets.

“The choice of process used to produce an alnico magnet depends on the size, weight, and its final use. In general, very large magnets, weighing several pounds, are cast, while smaller magnets, to be manufactured in large quantities, are made by sintering. Below is an explanation of each process.

Heating:
“Each grade of alnico magnet has a different combination of its basic elements. The proper amount of elements is placed in a furnace to be melted at 1750° C. Extra aluminum is added to replace the aluminum that melts away. To ensure quality, a sample of the mixture is cooled for examination.

Casting:
“The molten mixture is poured into a mold of green sand to cool. During the cooling process, the mold shell disintegrates and leaves a small residue. Molds are made larger to allow for shrinkage.

“Cast alnico magnets can be custom manufactured into complex shapes which are not possible to achieve with most other manufacturing techniques used for permanent magnet materials. Alnico magnets are hard and brittle, and are therefore prone to chipping and cracking. Machining or drilling of alnico magnet material cannot be accomplished by ordinary methods and cutting or grinding should be done prior to magnetization…

Fettling:
“Once the cooled magnets are removed from the mold, they are fettled on a grinding wheel to remove the mold’s runners.

Heat Treatment:
“The magnets are heated and placed in a magnetizer. As they cool, they are exposed to a strong magnetic field, a process that is known as hardening. They are then placed in a tempering oven to temper and stabilize the magnetic field. This gives the magnet its final magnetic properties. The image below is a summary of the manufacturing process from raw material to final shipment. Please note the heat treatment process to the right in the image.

Finish Grinding:
“To get the magnets to the proper tolerances, they are ground a second time.

Testing:
“Hysteresis graph testing is used to examine the magnet’s design, which is the B and H curve, or hysteresis loop. This characterizes a magnet’s material.

Coating:
“Though alnico magnets do not need a protective coating, they are painted or coated to cover their dark grey appearance. Painting or coating is the final step of the process. The poles may be left unpainted and shiny.

Sintering
Pressing:
“Unlike the casting process, sintering involves grinding the elements into tiny particles to form a powder, which is placed under tons of pressure in a die.

Sintering:
“After pressing, the material is placed in a sintered furnace with a hydrogen atmosphere over 1200o C, a process that fuses the small particles.

Coating:
“Sintered alnico magnets do not require any shaping or grinding. They have already been pressed into the desired shape. Coating is completed before the magnet is magnetized.

Magnetizing:
“The magnet is magnetized by being placed in a coil or solenoid.

Shapes and Types of Alnico Magnets

Bar:
“Bar or block magnets are used in schools for experimental applications, such as demonstrating a magnetic field. Bar magnets are the weakest shape because of the small area of the poles but are the most common shape. They can be used in automation, separation, and holding applications.

Cylinder:
“Cylinder, or rod, magnets are used for seals, sensors, coin collection machines, and guitar pickups. Amplifiers, actuators and motor applications use alnico magnets for their flux density. Cylinder magnets are sometimes used for medical applications for their strength and ability to be adjusted.

Horseshoe:
“Horseshoe magnets are bar magnets that have been formed into a U shape, which makes them strong because the poles are pointed in the same direction. They can be used to pick up metal objects of any size depending on their strength.

Pot:
“Pot, holding, or mounting magnets are used for holding applications. They are an alternative to normal fixture and fastening methods. Mounting magnets can be easily removed and relocated unlike permanent approaches.

Ring:
“Ring magnets are round with a hole in the middle and are sometimes referred to as donut magnets. The location of their north and south poles depends on the way they were polarized. One half of the magnet is always north, while the other is south. Certain kinds of polarization creates magnets that are split into quarters or eighths.

“Ring magnets are used in science experiments and for medical applications. People with implanted cardioverter defibrillators, or ICDs, automatically receive shocks to their hearts if the rhythm becomes irregular. When the device malfunctions, it shocks the patient unnecessarily, which leads to irregular rhythms. Placing ring magnets on a patients’ chest, over the ICD, disables the device.

Alnico Magnet Coatings
“Alnico magnets have strong resistance to oxidation and corrosion and do not require a protective coating, plating, or surface protection. Their corrosion resistance is so strong that they are not affected when exposed to oil, solvents, gasoline, or alcohol. Their one vulnerability is their iron content. If they are exposed to water for an extended period of time, they get surface corrosion. This same weakness can occur if they are exposed to alkali solutions and inorganic acids.

“Though a coating is not needed, manufacturers will paint alnico magnets to improve their appearance and cover their natural dark grey color. In the majority of cases, red, as seen in the example below, is the color of choice. They can also be coated with chrome or nickel.

“Alnico magnets are used for applications with high operating temperatures. They are used where a strong permanent magnet is required. such as electric motors, electric guitar pickups, microphones, sensors, loudspeakers, and cow magnets.

“The fact that they have high flux density, magnetic lines of force, at a reasonable price makes them a primary option for many uses. Alnico magnets have the lowest reversible temperature coefficient of any available magnet at 0.02% per degree of centigrade, which creates temperature stability.

Motors:
“Alnico rotor magnets have multiple poles with alternating polarity. The hole in the rotor allows it to be mounted on a shaft. They are excellent for use in synchronous motors, dynamos, and air turbine generators.

Cow Magnets:
“Cow magnets are a tool to save the lives of cows, which eat grass, dirt, nails, staples, and bits of bailing wire. When iron items work their way through the stomachs of cows, they cause ‘hardware disease’, which threatens the cow’s vital organs and causes irritation and inflammation. The magnet is inserted into the cow’s mouth as a pill and lodges in the cow’s second stomach to attract the stray metal.

Speakers:
“Alnico magnets are preferred in speakers because they allow for precision tuning of the magnetic field in the air gap, which creates optimum acoustic performance. The air gap is the air between the poles of a magnet. In the case of speakers, one pole of the magnet surrounds the other pole. The magnetic field in the air gap is very strong and requires precise control, which is possible with alnico magnets.

Electric Guitar Pickups:
“One of the most popular uses of alnico magnets is as an electric guitar pickup. The purpose of a pickup is to convert the vibrations of the guitar strings into electrical signals, which are sent on to the amplifier to boost the guitar strings volume. The magnetic properties of alnico 2, 3, 4, and 5 magnets makes them ideal for this application. The pickup makes it possible for an electric guitar to be heard over loud noises.

Grate Magnets:
“Grate magnets are a protective device installed in hoppers, floor openings, vertical chutes, and ducts. They are designed to catch and trap fine iron contamination. Weakly magnetic or very fine iron contaminants become trapped in the grate and are later wiped off.

“Alnico magnets come in several variations with different amounts of aluminum, nickel, and cobalt. The varying percentages of the base metals alters the strength of the magnet, which creates a variation in their individual magnetic fields.

“There are 29 grades of alnico magnets, which are 17 cast, 10 sintered, and 2 bonded. The grading system is based on the magnet’s chemical composition, residual induction, coercive force, maximum energy, the percent of cobalt, and operating temperature. As the operating temperature rises, so does the grade of the magnet.

Alnico 2:
“Alnico 2 is the second weakest of the alnico magnets with a low cobalt content. It is isotropic with low magnetic output and widely used with electric guitars. They are famous in audio sound recording and performance for their ability to clarify sound. Though alnico 2 magnets are weaker than alnico 4s and 5s, when they are used on an electric guitar pickup, they produce a cleaner sound.

Alnico 3:
“Alnico 3 has the lowest strength of the Alnico magnets with zero cobalt content. As with alnico 2, it is isotropic with low magnetic output and is used with electric guitars. They have the same sound capabilities as alnico 2 magnets.

Alnico 4:
“Alnico 4 is a weak magnet, similar to alnico 2 and 3. It is an isotropic with low magnetic output and is used for sound recording and performance.

Alnico 5:
“Alnico 5 is the most widely used of the alnico magnets and has four cast versions and one sintered one. It delivers magnetic energy economically to magnetic circuits. It is a premium grade anisotropic magnet with superior magnetic output. The directional force of an alnico 5 magnet is created by its crystal orientation during its molten state. Large magnetic fields can be generated with alnico 5 magnets. For that to happen, they must be magnetically long and have iron or steel elements to reduce demagnetization.

Alnico 8
“Alnico 8 has the highest coercive resistance of all alnico grades and has excellent energy per unit volume with a low reversible temperature coefficient. It is used for applications exposed to demagnetizing fields or where a short magnetic length is required.

Alnico 9:
“Alnico 9 have high magnetic properties and a single crystal structure. They are used in geological detection devices and for defense and aerospace technology. As with most alnico magnets, alnico 9 magnets are resistant to high temperatures…”