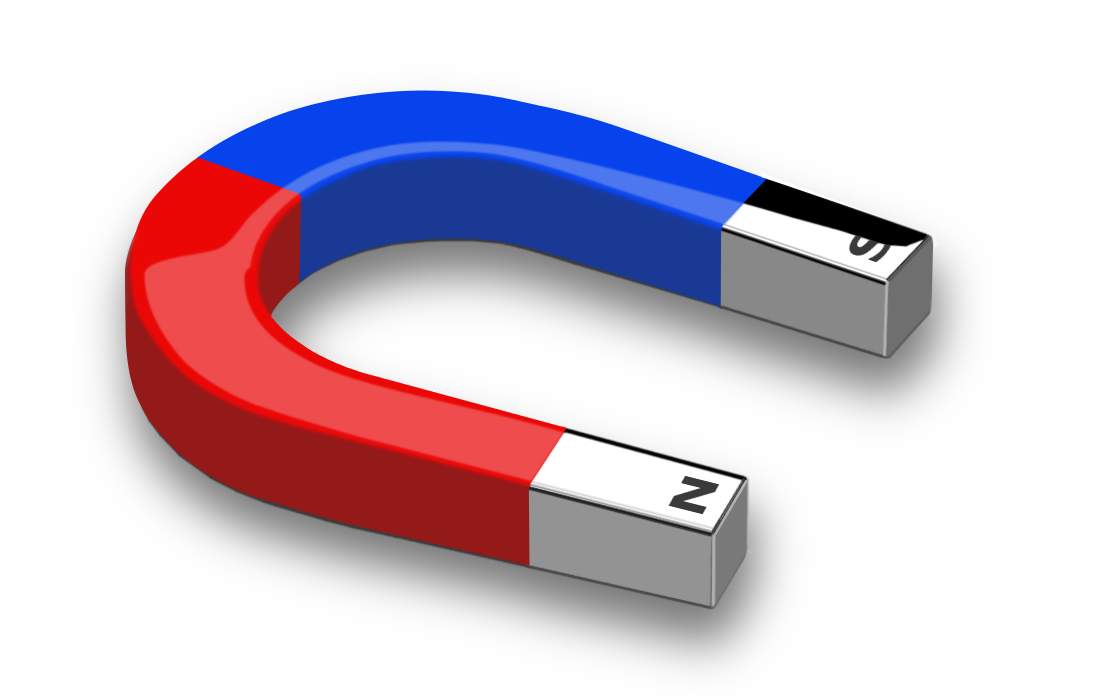 We use magnets in a multitude of ways every day, but how does magnetism even work? Consider this.

“Magnets. You have them on your refrigerator, you’ve played with them as a child, you’ve even held a compass in your hand as the compass needle pointed to Earth’s magnetic north pole. But how do they work? What is this phenomenon of magnetism?

“Magnetism is one aspect of the the fundamental electromagnetic force. It describes phenomena and forces associated with magnets or magnetic objects.

“All magnetic fields are generated by moving charge or changing electric fields. This is why the phenomena of electricity and magnetism are referred to collectively as electromagnetism. They are really one and the same!

“Within all materials, the atoms contain electrons, and those electrons form a cloud around the atomic nucleus, with their overall motion creating a miniature magnetic dipole. In most materials, however, the random distribution of orientations of these mini-magnets causes the fields to cancel out. Ferromagnetic materials are the exception.

“Many materials exhibit magnetic phenomena, including iron, manganese, magnetite and cobalt. These may exist as permanent magnets or may be paramagnetic (that is, attracted to magnetic materials but not retaining permanent magnetism themselves). Electromagnets are created by passing electric current through a wire wound around a material such as iron (or by any situation in which there is moving electric charge).

“Magnetic materials can either attract each other or repel each other, depending upon which portions of those materials are brought together.

“Just as with the electric force and the gravitational force, objects that exert magnetic forces on each other generate a field around them. A bar magnet, for example, creates a magnetic field in the space around it, causing any other magnets or ferromagnetic materials brought into that field to feel a force as a result.

“The SI unit associated with magnetic field strength is the tesla.

“Another common unit associated with magnetic field strength is the gauss.

“There are many different types of magnetism:

“Paramagnetism describes certain materials that may be weakly attracted to magnets but that do not retain a permanent magnetic field themselves. In the presence of an external field, they will form internal, induced magnetic fields that align. This can result in temporary amplification of the magnetic field overall. There are many different types of paramagnetic materials, even including some gemstones.

“Electromagnetism occurs when electric current is passed through a wire. That wire may be wound around an iron bar to amplify the effect as the iron will create its own magnetic field that aligns with the external field. This form of magnetism is a direct result of the fact that the motion of electrons creates a magnetic field. (Again, electricity and magnetism are two sides of the same fundamental physical property!)

“Ferromagnetism describes how certain materials – called ferromagnetic materials – form permanent magnets, which are discussed in more detail in the next section.

“Materials that are strongly attracted to magnets are called ferromagnetic. Iron is the most common material of this type. (Not surprising since the Latin prefix ferro- means “iron.”)

“Ferromagnetic materials have what are called magnetic domains; that is, regions within them that are like magnets, but oriented in different directions so that the overall effect cancels out and they don’t generally act like magnets. If, however, these materials are placed in a magnetic fields, this can cause an alignment of the domains so that they are all aligned in the same direction, and hence they become (often temporarily) like magnets themselves.

“A bar magnet is a rectangular or cylindrical bar of magnetic material. The ends of a bar magnet are north and south poles. These are the two types of magnetic poles, and they interact with each other via a magnetic force in a way similar to how positive and negative charges interact via the electric force.

“Bar magnets are magnetic dipoles. They have opposite poles separated by a distance, similar to an electric dipole. One primary difference, however, is that with magnets, you cannot have a monopole (an isolated pole) like you can have with charges. A magnet always exists as a dipole and never as a north pole by itself or a south pole by itself. (If you cut a bar magnet in half to try to separate the poles, you will simply end up with two smaller dipolar magnets!)

“As you likely know, the Earth has a magnetic field. This allows people to use compasses to determine which direction they are facing relative to the poles. A magnetic compass consists of a small magnet that can move freely and align with any external field. The red end of the compass needle points north. Earth’s magnetic field acts like a giant bar magnet. This imaginary bar magnet is oriented so that the north end of the magnet is at Earth’s southern pole and the south end of the magnet is at Earth’s northern pole.

“The magnetosphere protects us from solar wind, which contains charged particles. Interactions between these particles and the magnetic field lines are what give rise to auroras.

“The phenomenon of magnetism is used in all sorts of everyday applications.

“The phenomenon of electromagnetism allows us to convert mechanical energy into electric energy in electric generators. Electric generators use mechanical means to turn a turbine (blowing wind, or running water) which changes a magnetic field relative to wire coils, inducing current to flow.

“Electric motors are essentially the opposite of electric generators, using electromagnetism to convert electric energy into mechanical energy, whether it’s to run a power drill, a mixer or an electric vehicle.

“Industrial electromagnets are giant magnets with very strong magnetic fields that allow them to pick up old vehicles at the scrapyard.

“MRI machines utilize strong magnetic fields to create images of your insides and allow doctors to diagnose a whole host of medical conditions.”