4 Things You Should Know About Magnets for Electric Vehicles 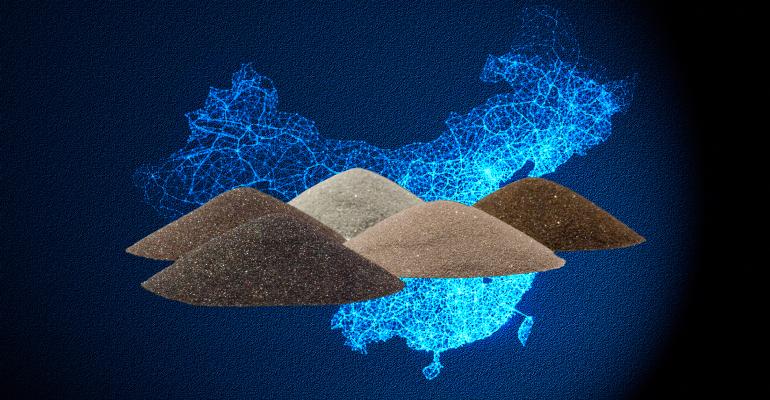 The rise in demand for the latter is also affecting demand of the former.

There are four main types of magnets: ceramic (ferrite), AlNiCo, Samarium Cobalt (SmCo), and Neodymium (NdFeB). The latter is one of the most commonly used in motors for hybrids vehicles and EVs. Neodymium magnets have higher remanence, along with much higher coercivity and energy production, but often lower Curie temperature than other types.

Special neodymium magnet alloys that include terbium and dysprosium have been developed with higher Curie temperature, allowing them to tolerate higher temperatures of up to 200°C. Because of the RE magnet properties, no other magnet material can match their high strength performance. “This is what it would look like if you try to replace the material to build a motor using a ferrite magnet instead of a RE magnet (Fig. 1).”

Magnets are divided into two categories:  Light Rare Earth (LRE) and Heavy Rare Earth (HRE). The global RE reserves consist of approximately 85% LRE and 15% HRE. The latter are the ones providing magnets rated at high temperature that are suitable in many automotive applications.

Six years ago, manufacturers worried that there would be a RE shortage after China cut its exports to the rest of the world to meet its own demands, triggering fears of a global shortage. Rare earth magnet values skyrocketed accordingly: They reached a high point of $2,200/kg from an earlier $130/kg. (Fig. 2). Manufacturers building loud speakers and electric motors had to re quote entire products just because of the rise of the magnet price. After the elimination of export quotas and taxes the following years (2012-2013), China saw an increase of about 35,000 MT due to the 2011 crisis.

China’s desire to dominate green industries like wind turbines and electronic vehicles is setting a high demand for its own rare earth metals, so there is no guarantee that another world crisis will start one more time.

Production Outside of China

Even though China is the largest producer, there are other countries mining rare earth minerals:

Mining rare earth elements is very toxic; it is very expensive to do it in a way that doesn’t contaminate the environment. State-of-the-art equipment is necessary to comply with environmental and labor regulations. Molycorp had invested more than $1.5 billion into a mine located in Mountain Pass, Calif.  (Fig. 3), but it was shut down in 2015 because it could not compete with lower RE prices.

“Rare Earth Elements are vital to the development and manufacturing of high-tech devices such as computers, cell phones, and our national defense systems,” says U.S. Secretary of Energy Rick Perry. “The current difficulties and high expenses associated with REE extraction has left the U.S. dependent on foreign REE imports. Supporting innovative research and development to establish efficient, cost-effective REE extraction methods is critical to our country’s energy and national security.”

Around 9,200 gr of RE materials are used in Hybrid & EV which 8,900 gr is Nd. Here are some of the RE magnets found in hybrid and EV vehicles:

Usage of magnetic rare earth in such vehicles is expected to grow from about 2,000 metric tons last year to 7,000 tons by 2020 and 12,000 tons by 2024, according to a presentation dated last month from Lynas Corp., the biggest rare earths miner outside China. The United States through exploration and research will keep looking for other sources of rare earth elements in other to not obstruct productiveness and competitiveness in green technologies.