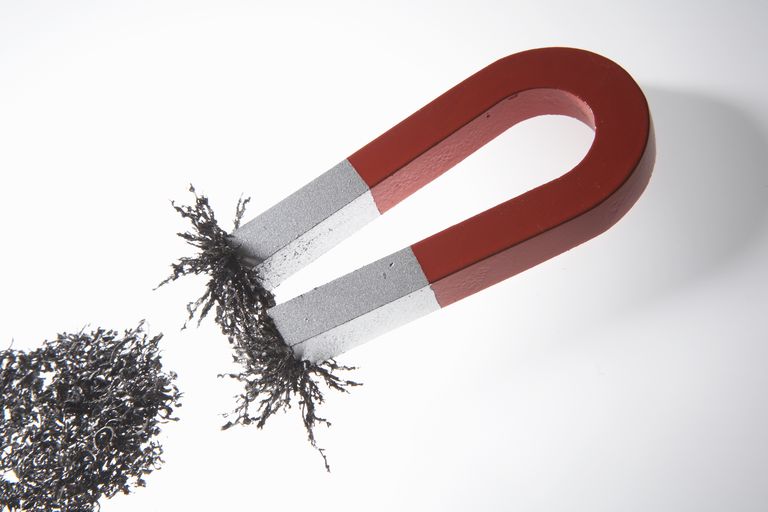 Ferromagnetism, the ability of a substance to magnetize, is a property that depends on the chemical composition, crystalline structure, temperature and microscopic organization of the material. Metals and alloys are most likely to exhibit ferromagnetism, but even lithium gas has also been shown to be magnetic when cooled to less than one Kelvin. Cobalt, iron and nickel are all common ferromagnets.

Magnetite is technically not a metal. Although it has a metallic finish, Fe3O4 is formed by the oxidation of iron into an oxide.

Iron is another transition metal and has a Curie temperature of 1043 k. It is amorphous (non-crystalline, unlike many other ferromagnets). Magnetic iron is used in power generation and distribution, nanowires and shape-memory alloys.

Nickel is another amorphous transition metal and has a Curie temperature of 627 k. It can be magnetized in the laboratory by rapid quenching (the scientific term for sudden cooling) the liquid alloy.

Gadolinium is a silvery-white, highly ductile rare earth metal used as a neutron absorber in nuclear reactors. It has a Curie temperature of 292 k and strong paramagnetic properties.

Dysprosium, has a Curie temperature of 88 k. It is another rare earth element with a metallic silvery luster and is more commonly found inside minerals such xenotime instead of a freely occurring, natural substance. Dysprosium has a high magnetic susceptibility, which means it is easily polarized in the presence of strong magnets.

Permalloy-based structures are ferromagnetic metals made of different proportions of iron and nickel. Permalloy is an active, tunable material which can be used in microwave devices or in tiny, single chip electronics. By altering the ratio of iron and nickel in the composition, the properties of the permalloy can be subtly changed. A 45 percent nickel, 55 percent iron composite is referred to as a “45 permalloy.”

A rare, black-gray alloy of nickel and iron with a chemical formula of Ni3Fe, awaruite was found in California and is displayed at the Smithsonian Museum of Natural History. Specimens of this rare substance are used to study the composition of meteorites and in other investigative geological applications.

An alloy of cobalt and iron, wairakite is classified as a primary mineral and is found in Tohi, Shizuoka and Chubu, Japan. A primary mineral is a sample of igneous rock which was formed in the first stage of solidification from the original molten magma. They contrast to the secondary minerals, which form after initial solidification, during weathering processes or geothermal changes.

Magnetite, Fe3O4, is a ferromagnetic mineral with a metallic finish. It is formed by the oxidation of iron into an oxide. Although it is not technically a metal, it is one of the most magnetic substances known and was the key to early understandings of magnets.