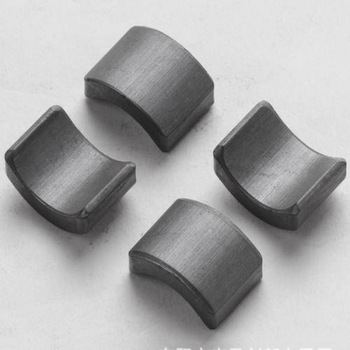 Ferrites are one of the main core materials used in inductors and transformers.

Inductor ferrite is used to provide an increase in the permeability of the medium around the coil to increase the inductance of the inductor.

Ferrites are widely used within inductor technology to improve the performance of the inductor.

Ferrites are basically iron based magnetic material in the form of a ceramic.

Ferrites are made from a powder and can therefore the ferrite cores used in inductors and other applications can be manufactured in a variety of shapes according to the requirements.

Ferrites, or as they are also known ferromagnetic materials can be classified into two categories based on their magnetic coercivity, or persistence of internal magnetism:

Ferrites are generally chemically inert ceramic iron-based materials. They generally have the chemical structure of the format XFe2O4, where X is a transition material.

To manufacture the ferrites used in inductors and other applications, the powers of the metals are mixed in proportions and then milled to give the required grain size and then pressed into shape.

Sintering entails heating the material to between about 1150°C and 1300°C.

Sintering is a process where a powdered ceramic material is held in a mold to give it the required shape and then heated to a temperature which is below the material melting point. It is found that the atoms in the powder particles diffuse across the particle boundaries, so that the particles become fused together. In this way a single solid item is created.

The sintered core of the inductor ferrite may still require further finishing – it may be ground to provide a very flat surface for situations where mating halves of a core are required. Here flat surfaces are essential to ensure that air gaps in inductors or transformers, etc., are as small as possible.

The finished ferrite material contains thousands of small crystals or grains. Typically these are around 10µm across. Within each grain or crystal there are many more smaller magnetic domains that can will have a random orientation after heating. With the application of an external field, these domains will tend to orientate in the same direction.

The permeability of ferrites used within inductors varies considerably between different types of ferrite. They can have permeability levels that may range between 20 to more than 15,000, although some very specialised ones may be higher.

One major parameter of interest to the electronic engineer using ferrites in inductors is the core losses they exhibit and their frequency dependence.

The core losses of a ferrite core can be expressed in the following manner:

It is found that he hysteresis loss increases linearly with increasing frequency and flux. The eddy current loss increases exponentially with increasing frequency and flux. However it is found that the hysteresis loss is the dominant core loss up to a frequency determined by the performance of the core. Above this the eddy current loss predominates.

To improve high frequency performance the grain size used in the preparation of the ferrite used for the inductor must be small, and also the mixture used must be free from impurities.