How is a magnetic field just an electric field with relativity applied? 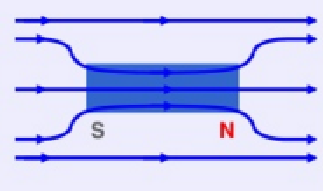 Electric and magnetic fields obey a set of physical laws called Maxwell’s equations. Einstein’s theory of Special Relativity describes how space and time change depending on the choice of inertial reference frame. It turns out that Special Relativity is automatically contained in Maxwell’s equations. In fact, Einstein discovered Special Relativity by closely scrutinizing and understanding Maxwell’s equations. Therefore, using Maxwell’s equations in relativistic form, we can figure out how to mathematically transform electric and magnetic fields from one reference frame to another. In other words, if I measure and map out the electric and magnetic fields in a room while I am standing motionless on the ground, then by applying the relativistic frame transformations to these field expressions I know what the fields will look like to an observer that is coasting through the room on roller skates. These electromagnetic relativistic frame transformation equations have been experimentally found to be correct.

Also note that I have used the word “inertial” a lot in this article. This means that we are only considering reference frames that have a flat spacetime, i.e. reference frames that are not accelerating and do not have large amounts of gravity. In order to describe non-inertial reference frames, you have to use Einstein’s theory of General Relativity, which is more complicated than Special Relativity. However, since the conclusion is the same (the electromagnetic field is unified and fundamental), I have described this article in the context of inertial frames for the sake of simplicity.