Some elements (e.g., iron, cobalt, and nickel) are ferromagnetic (can be induced to become magnetized in a magnetic field) at room temperature. For these elements, the electrical potential is lowest when the magnetic moments of the valence electrons are aligned. Many other elements are diamagnetic. The unpaired atoms in diamagnetic materials generate a field that weakly repels a magnet. Some materials don’t react with magnets at all.

Unpaired electrons tend to contribute to a material’s ability to become magnetic since the electron magnetic moment can’t be totally canceled out when there are ‘odd’ electrons. 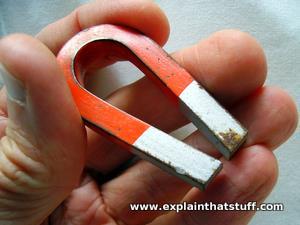