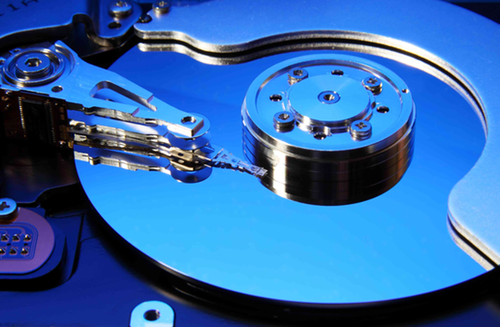 A class of magnetic materials can be reordered at the nanoscale more rapidly than the type usually found in magnetic hard drives, offering a possible route to faster memory devices.

The hard drive in your computer stores information in tiny regions that can be flipped from one magnetic polarity to the other to represent the zeroes and ones of binary data. The speed of such devices depends on how quickly these “bits” can be flipped, or “rewritten,” and a team of physicists has now shown experimentally that writing speeds might be made some 30 times faster by fine-tuning the magnetic geometry of the storage device. The demonstration may not lead immediately to faster memories but gives researchers a promising pathway to pursue them.

In most magnetic materials, each atom has a spin that acts like a microscopic magnet. If all these spins point in the same direction, the pattern is called ferromagnetic order, as found, for example, inside an ordinary iron magnet. But magnetic order can be more subtle, with the direction of spins varying systematically across the atomic lattice. Atomic spins in a line can alternately point up and down, for example, or they can gradually rotate to trace out a helix as you move across the lattice. These and other configurations produce no large-scale magnetism because every spin is cancelled out by another. This kind of pattern is known as antiferromagnetic order.

To overcome this problem, Christian Schüssler-Langeheine of the Berlin Helmholtz Center for Materials and Energy and his colleagues ran experiments using a thin film of the element dysprosium, which is ferromagnetic at temperatures less than 87 K and antiferromagnetic at higher temperatures. “We measure how both kinds of order change in the very same sample,” says team member Nele Thielemann-Kühn, who is now at the Free University of Berlin. “All we had to do was to change the sample temperature.”

“This experiment is very elegant,” says physicist Stefan Eisebitt of the Max Born Institute in Berlin. “It’s also important, as it shows that optical demagnetization can proceed faster if there’s no need to transport angular momentum away.”

“Our work is mainly fundamental research,” says Thielemann-Kühn, but she believes that their results might lead to speedier and more efficient magnetic devices. Although antiferromagnetic materials lack the clear distinction between opposite polarities that make ferromagnetic memories so convenient, she says that other researchers have been working to find ways to store bits of information in antiferromagnetic zones, which could in principle be flipped much faster. Another possibility might be to improve the switching speed of conventional ferromagnetic bits by placing them in close contact with anti ferromagnetic materials that could provide a pathway for moving angular momentum in or out.