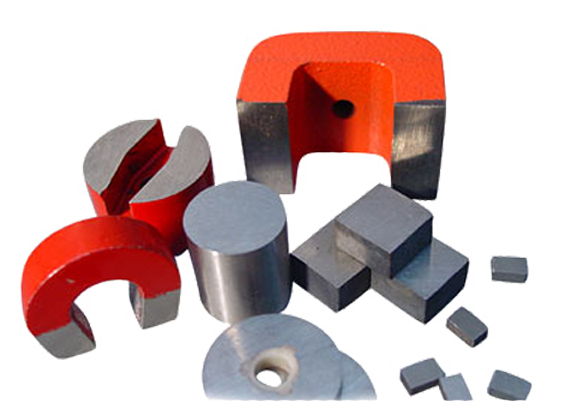 The origin of magnetism lies in the orbital and spin motions of electrons and how the electrons interact with one another. The best way to introduce the different types of magnetism is to describe how materials respond to magnetic fields. This may be surprising to some, but all matter is magnetic. It’s just that some materials are much more magnetic than others. The main distinction is that in some materials there is no collective interaction of atomic magnetic moments, whereas in other materials there is a very strong interaction between atomic moments.

The magnetic behavior of materials can be classified into the following five major groups:

Magnetic Properties of some common minerals

Materials in the first two groups are those that exhibit no collective magnetic interactions and are not magnetically ordered. Materials in the last three groups exhibit long-range magnetic order below a certain critical temperature. Ferromagnetic and ferrimagnetic materials are usually what we consider as being magnetic (ie., behaving like iron). The remaining three are so weakly magnetic that they are usually thought of as “nonmagnetic”.

Diamagnetism is a fundamental property of all matter, although it is usually very weak. It is due to the non-cooperative behavior of orbiting electrons when exposed to an applied magnetic field. Diamagnetic substances are composed of atoms which have no net magnetic moments (ie., all the orbital shells are filled and there are no unpaired electrons). However, when exposed to a field, a negative magnetization is produced and thus the susceptibility is negative. If we plot M vs H, we see:

Note that when the field is zero the magnetization is zero. The other characteristic behavior of diamagnetic materials is that the susceptibility is temperature independent. Some well known diamagnetic substances, in units of 10-8 m3/kg, include:

This class of materials, some of the atoms or ions in the material have a net magnetic moment due to unpaired electrons in partially filled orbitals. One of the most important atoms with unpaired electrons is iron. However, the individual magnetic moments do not interact magnetically, and like diamagnetism, the magnetization is zero when the field is removed. In the presence of a field, there is now a partial alignment of the atomic magnetic moments in the direction of the field, resulting in a net positive magnetization and positive susceptibility.

In addition, the efficiency of the field in aligning the moments is opposed by the randomizing effects of temperature. This results in a temperature dependent susceptibility, known as the Curie Law.

The paramagnetism of the matrix minerals in natural samples can be significant if the concentration of magnetite is very small. In this case, a paramagnetic correction may be needed.

When you think of magnetic materials, you probably think of iron, nickel or magnetite. Unlike paramagnetic materials, the atomic moments in these materials exhibit very strong interactions. These interactions are produced by electronic exchange forces and result in a parallel or antiparallel alignment of atomic moments. Exchange forces are very large, equivalent to a field on the order of 1000 Tesla, or approximately a 100 million times the strength of the earth’s field.

The exchange force is a quantum mechanical phenomenon due to the relative orientation of the spins of two electron.

Ferromagnetic materials exhibit parallel alignment of moments resulting in large net magnetization even in the absence of a magnetic field.

The elements Fe, Ni, and Co and many of their alloys are typical ferromagnetic materials.

Two distinct characteristics of ferromagnetic materials are their

(1) spontaneous magnetization and the existence of

The spontaneous magnetization is the net magnetization that exists inside a uniformly magnetized microscopic volume in the absence of a field. The magnitude of this magnetization, at 0 K, is dependent on the spin magnetic moments of electrons.

The Curie temperature is also an intrinsic property and is a diagnostic parameter that can be used for mineral identification. However, it is not foolproof because different magnetic minerals, in principle, can have the same Curie temperature.

In addition to the Curie temperature and saturation magnetization, ferromagnets can retain a memory of an applied field once it is removed. This behavior is called hysteresis and a plot of the variation of magnetization with magnetic field is called a hysteresis loop.

Another hysteresis property is the coercivity of remanence (Hr). This is the reverse field which, when applied and then removed, reduces the saturation remanence to zero. It is always larger than the coercive force.

The initial susceptibility (χ0) is the magnetization observed in low fields, on the order of the earth’s field (50-100 μT).

In ferrimagnets, the magnetic moments of the A and B sublattices are not equal and result in a net magnetic moment. Ferrimagnetism is therefore similar to ferromagnetism. It exhibits all the hallmarks of ferromagnetic behavior- spontaneous magnetization, Curie temperatures, hysteresis, and remanence. However, ferro- and ferrimagnetic have very different magnetic ordering.

Magnetite is a well known ferrimagnetic material. Indeed, magnetite was considered a ferromagnet until Néel in the 1940’s, provided the theoretical framework for understanding ferrimagnetism.

Magnetite, Fe3O4 crystallizes with the spinel structure. The large oxygen ions are close packed in a cubic arrangement and the smaller Fe ions fill in the gaps. The gaps come in two flavors:

The tetrahedral and octahedral sites form the two magnetic sublattices, A and B respectively. The spins on the A sublattice are antiparallel to those on the B sublattice. The two crystal sites are very different and result in complex forms of exchange interactions of the iron ions between and within the two types of sites.

The structural formula for magnetite is

This particular arrangement of cations on the A and B sublattice is called an inverse spinel structure. With negative AB exchange interactions, the net magnetic moment of magnetite is due to the B-site Fe2+.

If the A and B sublattice moments are exactly equal but opposite, the net moment is zero. This type of magnetic ordering is called antiferromagnetism.

The clue to antiferromagnetism is the behavior of susceptibility above a critical temperature, called the Néel temperature (TN). Above TN, the susceptibility obeys the Curie-Weiss law for paramagnets but with a negative intercept indicating negative exchange interactions.

Above -10°C, the spin moments lie in the c-plan but are slightly canted. This produces a weak spontaneous magnetization within the c-plan (σs = 0.4  Am2/kg).

Below -10°C, the direction of the antiferromagnetism changes and becomes parallel to the c-axis; there is no spin canting and hematite becomes a perfect antiferromagnet.

This spin-flop transition is called the Morin transition.