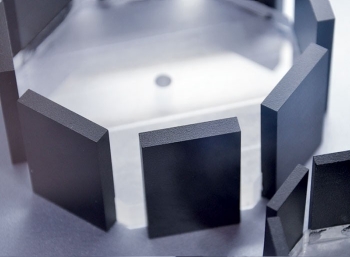 The rise of electric vehicles is threatening supplies of a host of the earth’s elements. Cobalt and lithium for batteries are getting most of the attention, but rare earths for electric motors are also a pinch point.

Permanent magnets keep electric motors turning in all kinds of devices, from electric toothbrushes to refrigerator compressors. In electric vehicles, the magnets need to last a long time without demagnetizing. They also have to stay stable at temperatures that can reach 100 ºC.

To meet those requirements, the magnets are made up of 30% rare earths, to take advantage of their many unpaired electrons, and 70% iron. The go-to rare earth for powerful, durable magnets is neodymium.

Most of this pricey element comes from China, and Toyota says demand is expected to increase rapidly. Smaller amounts of terbium or dysprosium are added to neodymium to lend heat resistance, but those elements are even more expensive.

Toyota has already cut terbium and dysprosium use in the 2016 Prius, and future magnets won’t use any, the firm promises. In addition, up to 50% of the neodymium will be replaced with the low-cost rare earths lanthanum and cerium.